Home La Liga Catch them while you can: Messi and Ronaldo will not be around...
Facebook
Twitter
Google+
WhatsApp

To a 70s kid the sense of awe even to meet anyone who had seen Pelé or Eusébio or Johan Cruyff play was overwhelming. Just imagine that … watching such players in the flesh … in front of their own eyes. Some people of my parents’ generation had attended the 1966 World Cup in England, so every now and again a football conversation would turn in the direction of the greats and these lucky souls would not be able to contain their welling satisfaction as they piped up: “I saw Pelé play.”

It was jaw-dropping stuff. For us kids Pelé’s legend mainly existed in books and magazines, short clips on a football programme every now and again, or a montage every four years when it was World Cup time. The mystique about his genius shimmered in a particular way because so much was left to our imagination. Names like Garrincha, Puskas, Di Stéfano somehow felt more fantastical than real. 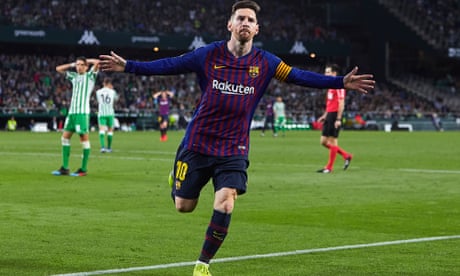 Oh. My. God. Messi, a hat-trick and a stadium left in suspended animation

The other day, as Lionel Messi seduced a stadium full of Real Betis fans with an explosively beautiful hat-trick, coming so soon after Cristiano Ronaldo carried Juventus onwards in the Champions League fuelled by his own theatrical charge, it was only natural to think about how lucky we are to love football at the same point in history that these two are playing, especially as so much is accessible, in real time, to be watched by anyone anywhere.

Even so, the idea of seeing them play, not through a screen but with the naked eye, retains that elemental magic that made anyone who had seen Pelé on the pitch seem like a special person. The clock is ticking. Messi and Ronaldo have been the centre of football’s universe for around 15 years and, however much their brilliance seems superhuman, however convincingly they appear to play in a different zone of time and space from anyone else, well, it is not realistically going to go on forever.

It is a scary and somehow discomforting thought. What will the football landscape look like without them? How will we manage? It feels like a necessity to savour the spells they continue to cast. Ronaldo is 34. Messi will be 32 in June. The compulsion to go and see them while you can, if you have not already, is powerful.

A group of eagle-eyed parents recently provided their offspring with the opportunity of a lifetime when they spotted one of the Champions League sponsors offering a mascot experience for the quarter-finals. Two English boys were selected to attend Juventus v Atlético Madrid, and one for Lyon v Barcelona. The cost for this chance to brush ridiculously close to greatness was €350 (£303). It might sound on the steep side but it turned out to be bargain. Two face-value prime tickets for parent and child, at €220 each, already more than pays back the outlay.

The mascots in Turin met up at 4.30pm on the day of the match, got a training session and snacks at a nearby sport centre, went to their dressing room to be handed their kit to keep (you had to supply your own black boots; Adidas was requested but black tape was available to mask any non-official manufacturer).

Then came the big moment, to meet the players in the tunnel and march hand in hand into the spotlight. Apparently the player each mascot is appointed is random, but when Ronaldo noticed a kid with CR7 shaved into his hairstyle, there was a last moment switch as to which mascot got the best gig. While most of the other mascots were Italian a girl flew in from Indonesia who did not really seem to know what was going on but her father was very happy.

The boy who travelled to Lyon against Barcelona, a nervous eight-year-old from London, had the ridiculous luck to land Messi as his hand to hold. “I was more excited than him to be honest,” his father said.

I remember a considerably less glitzy experience in my youthful attempt to pay homage to Arrigo Sacchi’s legendary Milan team, the most glamorous thing in football at the age when it was suddenly possible to go off on footballing travels. Clapping eyes on Milan’s Dutch trio, Marco van Basten, Ruud Gullit and Frank Rijkaard, with the masterful defender Franco Baresi patrolling behind, felt like an obligation, a pilgrimage.

After travelling by rail to Italy, 29 September 1991 was the date of destiny, having secured a ticket outside San Siro for Milan v Genoa. What happened next made the moment memorable if not in the ideal way. A biblical storm broke. Three minutes and 12 seconds into a second half that resembled more of a water sport than football, with Milan leading 1-0, the referee called it off. Some 69,909 spectators were infuriated and had little option but to wade off.

There were some kerfuffles outside at the Piazzale Axum, the area where the buses and trams ferry supporters to and from the stadium. Everywhere was ankle deep in water. L’Unita newspaper the following day would describe San Siro forlornly as a “barca”, a boat.

It is funny the details that stick in the mind for decades. Some pathetically made espadrilles disintegrated in this sudden urban lake, so I ended up walking away from my dream visit to watch the team I most admired in the world, barefoot. It might not have gone entirely to plan but still, I had seen Van Basten, Gullit, Rijkaard, Baresi et al.

It is not an uncommon sentiment to ponder how or when it might be possible to see Messi or Ronaldo, to be able to go through life and say: “I saw him play.” It is strange to ponder how the game may feel in the probably not too distant future when they are no longer the protagonists, no longer on stage and under the lights, no longer active players.

Messi has been in Barcelona’s first team since 2005. Ronaldo became the world’s most expensive teenager, a leap to propel him into the international consciousness, in 2003. Any football lover on the planet under the age of roughly 21 will not remember a time when football’s constellation did not revolve around these two most luminous stars. And maybe, when all is said and done, that is what has made this era so extraordinary. People craw or wince at the who is better or who is your favourite nonsense.

But what brilliant luck to have these two somehow pushing themselves as well as each other. It would not have been the same had there been a Messi era and a Ronaldo era without them constantly overlapping.

Catch it, catch as much of it as you possibly can.

… we sincerely hope you enjoyed this article, which was our gift to you. At The Guardian we don’t believe in putting up paywalls, seeing our journalism as a Sunday league centre-back sees possession of a football, as something to be given away in a manner some would consider reckless. But not all the best things in life are free and sending crack journalists to top sporting events armed with deep knowledge, a working laptop and a vaguely acceptable level of literacy certainly is not. We welcome you here all the same, because we like you – all of you, but especially the ones who give us money.

If you like what we do, perhaps you might consider becoming the small-scale Sheikh Mansour to our miniature Manchester City by making a small contribution.

If everyone who reads and enjoys our reporting helps to support it, our future will become much more secure. For as little as $1, you can support the Guardian – and it only takes a minute. Cheers.